Who buys from us? Brands, retailers, leagues, teams, players, associations and corporations that want the best hockey sticks and believe buying Canadian-manufactured goods is an important part of their social responsibility. 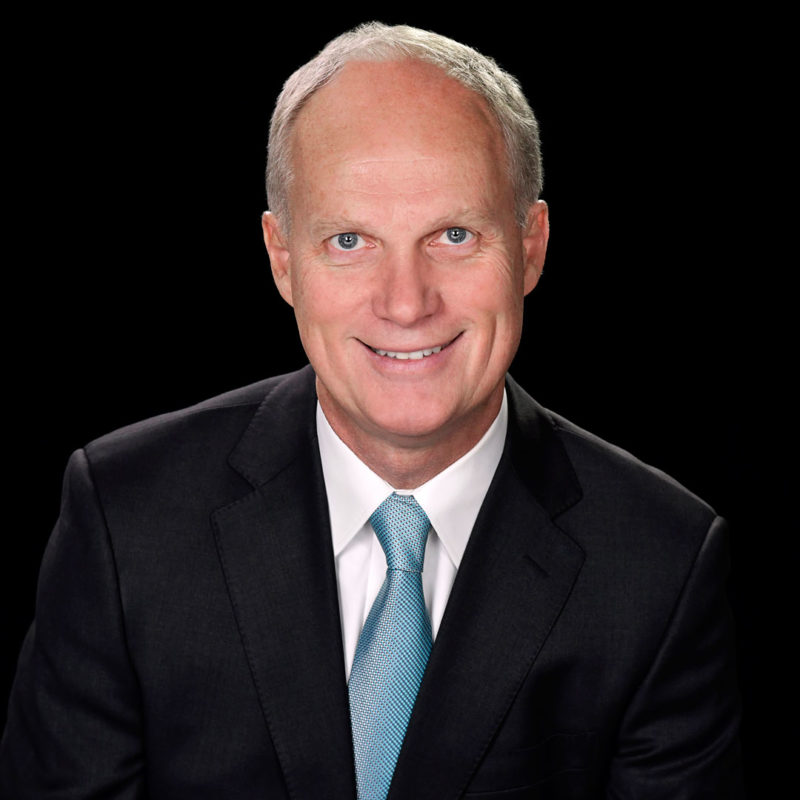 W. Graeme Roustan acquired Heritage in April 2019 and is the Executive Chairman.

W Graeme Roustan was previously the Chairman of Performance Sports Group, the then-owner of Bauer, Mission Itech, Cooper, Cascade, and Maverik, as well as other brands, from 2008 through 2012. Mr. Roustan led and won the Nike sale process to acquire Nike Bauer in 2008 and took the company public on the Toronto Stock Exchange in 2011 as its Chairman. He is currently the owner of The Hockey News and several other hockey industry businesses.

He was the Governor of the Canadian Women’s Hockey League (CWHL) during its first 10-plus years of existence, is currently on the Canadian Olympic Committee, is a graduate of the Institute of Corporate Directors at the University of Toronto Rotman School of Management and a National Association of Corporate Directors (NACD) Board Leadership Fellow. Click here to learn more about W. Graeme Roustan.

In the beginning, 30 years before the NHL even formed, Heritage Hockey was making hockey sticks. It began with wood in 1887 and evolved over the decades to remain cutting edge and modern. Today, thanks in part to the 2015 acquisition of Advanced Composite Materials, Heritage makes sticks across the spectrum, from wood to composite to its hybrid line, which promises to be a big part of our future.

Over the decades, every major hockey brand has contracted Heritage to manufacture sticks for them. When I was Chairman of Bauer, tens of thousands of the Bauer sticks that featured the Bauer logo were made by Heritage in the same factory we call home today. Bauer and other brands and retailers select Heritage because of the high quality workmanship and a commitment to support manufacturing jobs in our premiere selling market, Canada.

Acquiring hockey businesses has been rewarding to me in many ways. The core of my investment strategy is based on advice I was given by my late grandfather: “Pursue your passion and a career will appear.” As the past Chairman and part owner of Bauer, Mission-Itech, Cooper, Micron, Lange, ICM, Easton, and then sole owner of Christian, Torspo, Northland and The Hockey News, I believe it’s fair to say I know great hockey brands. With the acquisition of Heritage, I am extending my reach even further, and I’d like to introduce you to one of the most historically important hockey companies that you’ve likely never heard of. – W. Graeme Roustan

Perhaps it should come as no surprise that the roots of the company now known as Heritage Hockey Sticks (Heritage) are not only almost as old as the game itself, but can trace its lineage back to a company that made handheld farm plows. Those farmers who used ‘The Ayr 21’ plow from the American Plow Works late in the 19th century were working the soil and living their dreams, just as countless players have lived out their hockey dreams using sticks that have come from the manufacturing plants that have produced millions of them.

The company has survived everything from massive fires to a technological revolution in the industry to a plant closing without ever losing sight of its mandate to produce reasonably priced hockey sticks of high quality. In that sense, for more than a full century, it has displayed the same kind of fortitude and determination as the players who have used them.

Hockey sticks have been produced in Hespeler, Ontario, where Heritage is still based, since 1887, but what is now known as Heritage is a conglomeration of hockey-stick pioneers from the Southwestern Ontario towns of Preston, Ayr, St. Mary’s and, of course, Hespeler.

Today, Heritage is the lone manufacturer in Canada or the United States that mass-produces wooden, ABS, foam-core and hybrid composite sticks.

It all started in 1887, when E.B. Salyerd & Sons Ltd., placed its first hockey stick on the market and dubbed it the ‘Salyerd Special Hockey Stick.’ Five years prior to that, William Hilborn purchased American Plow Works in 1882 in Ayr. But with emerging technology in agriculture and hand plows becoming obsolete, Hilborn saw an opportunity and began mass-producing hockey sticks, in part because his sons, Albert and William, were emerging as excellent hockey players in the Toronto Bank League. He found that the machine used to shape and mold plow handles was also suitable for making hockey sticks, so he set out to find a new purpose for rock elm wood, constructing up to eight sticks with one piece of wood. By 1910, the name of the company had been changed to the Hilborn Company and began supplying hockey sticks and bats to the Spalding Company. Within a decade, Hilborn was also supplying sticks and bats to CCM, Eaton’s and distributors all over Canada.

Meanwhile, hockey sticks were also being made at the St. Marys Wood Specialty Company, a business that was started by Solomon Lewis Doolittle in 1908. Like Hilborn, Doolittle originally started his company with the purpose of manufacturing tools for working the land, producing products such as axe handles, shovels, brooms and mining tools. But he, too, also saw an emerging market for hockey sticks. Before long, the plant was mass-producing a complete line of sticks for suppliers around Canada. In 1908, St. Marys Wood Specialty Company began to manufacture handles for axes, hammers and sledgehammers along with baseball bats and hockey sticks. By 1909, it was producing 16 models of hockey sticks. Not even a fire that destroyed the plant in 1912 could deter Doolittle, and the plant was up and running again within a couple of months.

As the game evolved and the demands of players became more sophisticated for their sticks, the companies responded by turning out sleeker models. Manufacturers began making spliced hockey sticks with appealing names such as Red Flash, Viking, Wizard and Arrow. Clearly the hockey stick was transforming from a basic instrument of play into one that could be manipulated and changed to give players and advantage. And the hockey-stick companies had to change with the times. 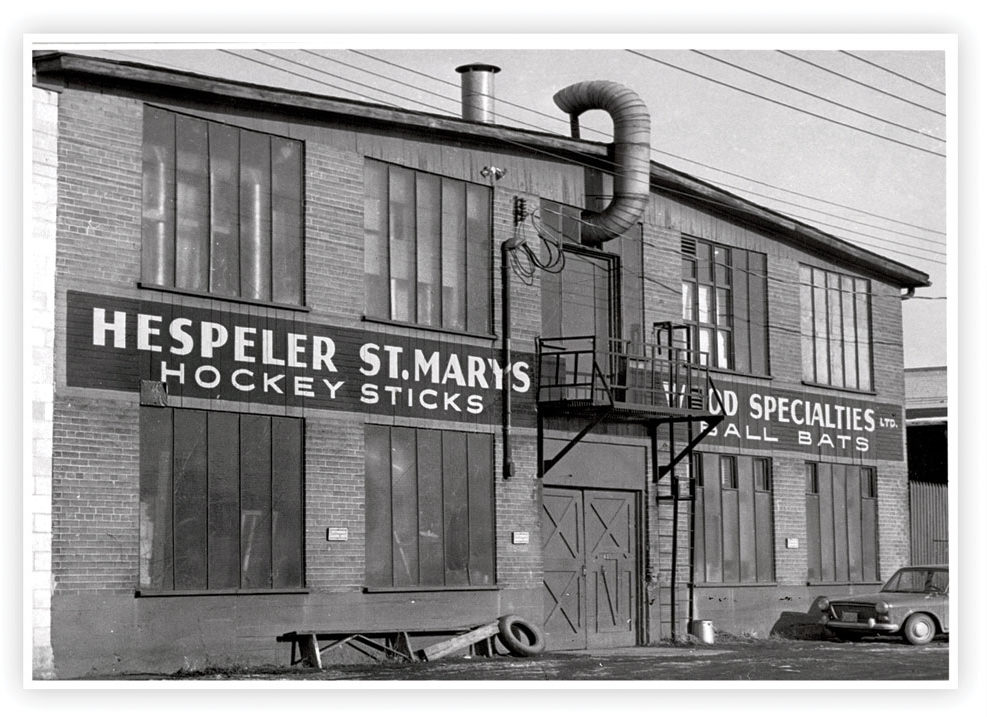 Meanwhile, Hespeler Wood Specialty began operations in 1922 and started making sticks that were gaining notice around the world. The company patented a three-piece goalie stick and had two patents for two-piece sticks for skaters. In 1926, Hespeler patented a heel joint, which essentially became the pattern for the manufacturing of wood sticks.

But then The Great Depression took hold and, as the devastating results of it continued to take their toll in the 1930s, stick manufacturers felt the effects. The Hilborn Company was sold to Waterloo Wood Products, and the St. Marys Wood Specialty Company was also sold. The disparate hockey stick business in Southwestern Ontario became one when Canada Barrel and Keg, a subsidiary of Jos. Seagrams and Company, purchased the Hiborn Company, St. Marys Wood and Specialty, Hespeler Wood Specialty, E. Salyerds & Sons and McNiece & Orchard Ltd. By the summer of 1934, all the original plants were closed, and the equipment and workforce were transferred to Hespeler under name of the Hespeler-St. Marys Wood Specialty Company.

The 1940s and 1950s were when things boomed for Hespeler as it produced wood products, including hockey sticks and baseball bats, at a dizzying pace. The work was hard and meticulous and done by hand, producing the quality that players around the world came to know and expect. In 1972, Hespeler Wood Specialty Company was purchased by sports equipment giant Cooper but continued to operate under its own name until it was named Cooper Canada Ltd., in 1979.

Ten years later, Cooper was taken over by Canstar Sports Group of Montreal and concentrated its efforts largely on hockey sticks. The baseball bat line was sold to Irwin Toys. Cooper would later be bought out by Charon Industries (which produced Bauer products), which was bought out in turn by Nike Inc. in 1994 to produce Bauer Nike Hockey Inc. The Hespeler facility continued to produce Bauer sticks for seven years. Then, in October 2003, the firm announced it would close the facility.

Heritage Wood Specialties Inc., was formed in 2004 when Nike Bauer divested itself of the wood stick manufacturing business with the intent of closing the plant. But a small group of Bauer employees put together their own funds and found an investor to purchase the assets from Nike Bauer and began making sticks for Bauer, CCM and all the other major hockey brands and retailers in North America.

Heritage has manufactured sticks for Bauer, CCM, Sher-Wood, Warrior, Vaughan, Brian’s and Christian, among others, and continues to do so today for some.

In April 2019, Heritage Wood Specialties Inc. changed its name to Heritage Hockey Sticks Inc., when it was sold to W. Graeme Roustan who, in 2008 as Chairman of Bauer Performance Sports, acquired Bauer from Nike and served in that capacity through the end of 2012.

Heritage Hockey Sticks is based in Cambridge (formerly Hespeler), Ont., where today it manufactures hockey sticks for NHL goalies and position players, as well as foam-core goalie sticks, street-hockey sticks, sledge-hockey sticks and autograph sticks for the hockey industry.

If you’ve seen a player toss a stick into the crowd after being named one of the game’s three stars, or Hockey Hall of Fame inductees posing with a stick, there’s a good chance it was a Heritage stick.

New technology brings changes to the game and Heritage changes its offerings by adding composite and hybrid offerings, allowing the sticks to be both light and durable.

More than 130 years have passed since the walk-plow handle found life as a hockey stick, but the plant in Cambridge continues to produce hockey sticks with the same care and craftsmanship. Heritage manufactures the highest quality “Made in Canada” hockey sticks and distributes them within Canada and USA to hockey brands, retailers and others who support manufacturing jobs in Canada.

Southwestern Ontario has produced countless players for the NHL and millions have played the game at all levels. The same area has produced the sticks that many of them, as well as millions of others around the world, used to get to the next level.

That’s why Heritage Hockey Sticks has a heritage unlike any other hockey stick company in the world.